In honor of the resurgence of soccer in the US, I launched a World Cup challenge (which Salil Bali won by picking Germany to win) and made it really simple.  No need to guess who will make it out of pool play or fill out a complete 64 match bracket.  Just predict the winner.  Of course, since the picks had to be made before the tournament began, some people’s picks never got out of group play (I’m looking at you Spain and Italy).

For tie breakers, I used the runner up, then the 3rd place team and then the 4th place team. And if more than one person happened to predict all 4 of those, the next tie breaker would have been the winner of the golden boot (top goal scorer at the World Cup).

And if 2 people were still tied, I’d flip a coin.

The Prize: The winner had a donation of $250 made in his name to his choice of one of three charities:

Shirish Gupta is an award-winning mediator and arbitrator with JAMS. He coaches youth soccer, referees, serves as an AYSO board member, coordinates a division and plays adult soccer.  He won the AYSO Area Sportsmanship Award and Coach of the Year in 2014. Most Saturdays, he can be found on a soccer pitch.
Book a mediation with Shirish. 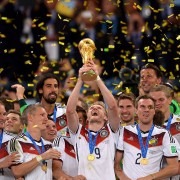