In my Spring 2016 Negotiation class, the students conducted a negotiation wholly via text-message. A couple of interesting insights from that were: 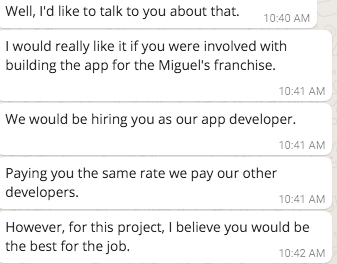 In that vein, responses should be near instantaneous. One student went offline for over an hour and had trouble regaining the flow whereas, one conversation had 204 texts rarely going more than 2 minutes between posts. Unsurprisingly, the latter won the deal.

One third of the conversations had about 30 messages, another third had 60 messages and another third had 90 messages. The 204 was an outlier, but was very effective in establishing rapport. BTW: he was one of a few people to use emojis, which his counterparty acknowledged and reciprocated.

Negotiating with a Govt Entity